All you need to know about Emeralds

Hue
Emerald, like ruby, blue sapphire, and tsavorite garnet, is one of the primary-colour gemstones. That is, the most desirable colour is the purist green possible. Although it is true that a small percentage of yellow (ten to fifteen percent) will enhance or frame the dominant green hue, the purer the green the finer the stone. Emerald personifies the pure idea of green. Close your eyes and picture the richest, purist green you can imagine: rich meadow grass growing by a shaded pool in high summer – that is the finest colour in emerald!

Emerald is usually either a bit yellowish or a bit bluish; in practice, it may have a bit of both as secondary hues). A slightly bluish secondary hue (ten to fifteen percent) adds a richness and warmth to the overall appearance of the gem. For this reason it is a more desirable secondary hue than yellow. As always, the gem should be examined in all light sources. Incandescent light will bring out the blue. This is the primary reason why some connoisseurs prefer an emerald that is slightly yellowish in daylight. They feel that a bit of yellow balances against the tendency toward blue under the light bulb. If the stone shows more than a fifteen percent blue secondary hue in incandescent lighting it is over blue. African emerald from Zambia often suffers this fault.

Saturation and tone
The colour green achieves its optimum saturation, its gamut limit, at about seventy five percent tone. Thus, emerald achieves its most vivid saturation at this tone. Grey is the normal saturation modifier in emerald. grey will reduce or dull the hue. Gems with visible gray should be avoided. Sometimes the gray component will be very difficult to discern. Aside from a sense of dullness, the hue of a greyish emerald will appear distinctly cool in incandescent light 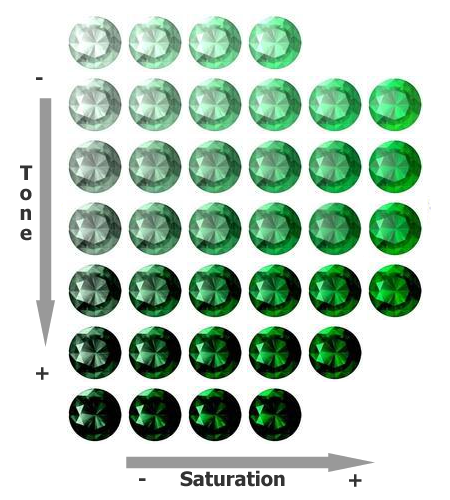 Effect of Carat Weight on Price

Where to Buy Emeralds

The perfect gem for those seeking the exceptional in moderate size, this is a beautiful specimen of Colombian Emerald.

A beautiful Colombian Emerald with a magnificent point of color, an intense and vivid green, illuminated by the natural brilliance of the crystal.

A magnificent drop cut Emeralds pair, from the beautiful green and a remarkable transparency.

Treatments and their effect on price

How to distinguish synthetic from natural Emeralds